Start a Wiki
Welcome to the Fulham Football Club Wiki!

1,594 articles since February 2012
About The Wiki • Random Page • Recent changes 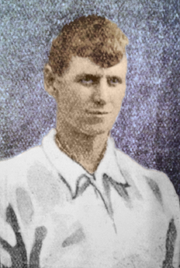 Tommy Meade was a centre forward who was at Fulham from 1900 until 1905. He had previously played for Woolwich Arsenal and Tottenham Hotspur.

He signed terms with Fulham in the 1900-01 season, and began to make an impression immediately, as he scored a brace on debut against Clapton Orient. Mainly used as a centre forward, he was occasionally used as an inside forward and on one occasion in the London League he even played as an outside left against West Ham's Reserves. He won Southern League Division Two medals in 1902 and 1903, yet Fulham managed to lose both of the play-off finals in those years.

On 27 December 1902 in a League match away at Grays United, Tommy had arrived at the ground without his boots and had to rush out to buy a pair - however, he must have bought a good pair as he scored all four goals in a 4-1 victory. According to the Grays & Tilbury Gazette, upon the final whistle the Fulham fans "rushed onto the field in a body and chaired Tommy into the dressing room". Unfortunately, his goals would not count as the match later had to be replayed (which they later lost) due to Fulham fielding an ineligible player by the name of Easter.

His goalscoring record at the club was impressive, and possibly would have stayed at the club longer had it not been for the large intake of players for the 1903-04 season. Tommy was in fact one of only three players to remain in the squad from the previous season, so much was the change of personnel. Due to this, Tommy only managed 7 Southern League appearances in that season, and no first team appearances the following season yet stayed at the club until 1905.

To write a new article, just enter the title in the box below.

Retrieved from "https://fulham.fandom.com/wiki/Fulham_Football_Club_Wiki?oldid=35104"
Community content is available under CC-BY-SA unless otherwise noted.